“My first encounter with a baby yak was one that was sick and needed my care. While moving aside its hair to examine the creature, I was struck by an incredible softness that I had never experienced in any other animal before.”

This is how we got the idea to introduce to the world the uniqueness of this fiber. First we chose a valley that was particularly suitable for raising the animals and collecting their undercoat, then we created a cooperative together with hundreds of nomad families, and finally we arranged the transport of the first samples of down to the Biellese area in Italy.
This is how our adventure began.

We are Paola and Andrea.

We have totally different life stories that came together in this remote, spiritual, and magical land: Tibet.

I went out from Italy as a veterinarian.
My desire to discover, to widen my horizon, to bring a more ethical imprint to my profession, brought me to socially-responsible enterprises in some of the world’s most remote areas. This is how I arrived in Tibet—to train local veterinarians and at the same time learn about their own traditional medical practices.

After my studies in Chinese, and many years of living and traveling throughout China, I encountered the Tibetan spirit—it was love at first sight. I spent years working on the Tibetan Plateau with farmers and nomads, teachers and children, in an effort to improve their conditions through better healthcare and education, income generation, and social entrepreneurship, while striving to preserve their culture. And every day I love the uniqueness of this land and its people more and more. 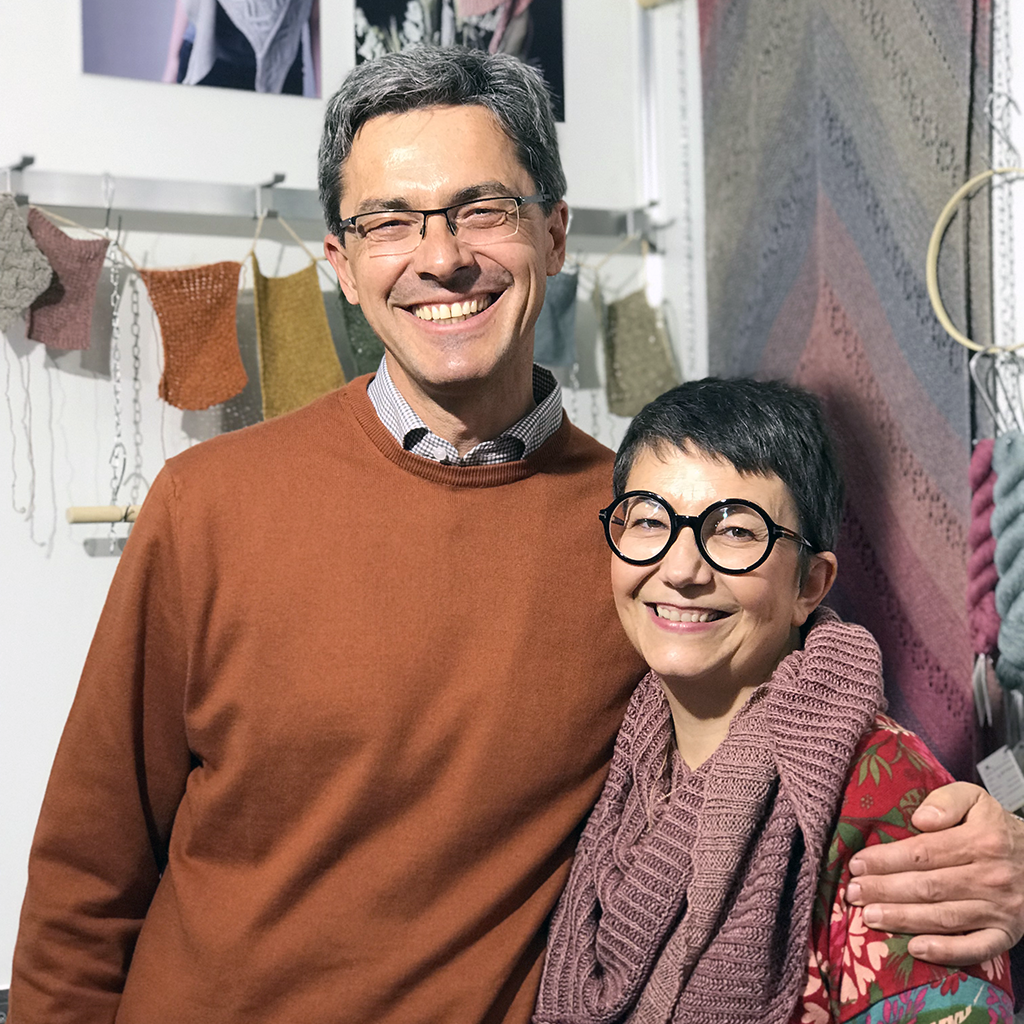 How did we come to love this land, its people, and this fiber?
We shared the life and habits of the nomadic herders. We loved the land, filled with vistas of herds and baby yaks. We stroked them and we discovered how soft their undercoat is. And we told ourselves: We must share this with the most passionate lovers of prestigious yarns and textiles, so that this world on the plateau can continue to thrive and sustain itself. Hence, we created a cooperative with local nomadic communities herding yak and Tibetan cashmere goats. We agreed upon a sustainable production chain, fully respectful of the traditions of these lands, of its people, and of the animals from which the raw material is collected. We decided to handcraft the yarns in Italy, in the Biellese area, a region renown for excellence in the sector.
This is mYak. Born in Tibet, crafted in Italy.

Our Commitment to Sustainability

The raising of yaks follows traditional Tibetan pastoral practices, by the nomadic herders who move across the grasslands. The established herding patterns ensure the longevity of healthy pastures. The cashmere goats cannot be raised on the grasslands, however, as contrary to yaks and sheep, they are selective grazers and year after year, their constant grazing changes the fields’ composition, modifying them irreversibly till they become deserts. In such a delicate environment, safeguarding the ecosystem is a fundamental concern.
Most of the cashmere found on the market has a devastating impact on the environment, and vast areas of Asia have been permanently destroyed in the production of this precious fiber.
Tibetan cashmere goats are traditionally raised in small herds in rocky areas, terrain more suitable for them and better for the environment. This is the source of mYak cashmere.

For the local population

Nomadic pastoralism is as ancient as the mountains of the Plateau. We want to give this tradition thousands of years old an opportunity to thrive and prosper in uncertain modern times, making it more fruitful for the people who live on the Tibetan plateau. We sought to promote what the nomads have been producing since time immemorial while adding value by having the fiber spun in Italy. In this way we are able to preserve the daily way of life and the natural environment of the population. In Tibetan culture, each gesture—from the lightning up of the braziers at dawn with propitiatory juniper, to the milking and churning—is a ritual, the meaning of which goes beyond the practical act. We want to preserve this interweaving of human life with nature and animals.

For those who choose mYak

Our point of view is the complete opposite of that of short-lived fashion. We think of crafters who enjoy creating something personal, unique, and original. And who want to do so by starting with a fiber that is born in a place unique in the world, and that is collected following the natural life rhythms of the animals and the people who raise them. The result is of artisanal quality, a fiber destined to last, to be handed down like a precious family heirloom.

A world of its own

Even today when with Google Maps, the internet and social media, we think we have the whole earth in sight, the Tibetan Plateau remains a world apart. Even further than the never-ending hours by air and by four-wheel drive that are needed to reach its grasslands.

Luckily there is still something to discover.

Here we have a community, the animals they raise, and an extraordinary natural fiber. And we decided to become part of their world, by living and working with them.

This is the story of a very special journey

As we journeyed on our road trip across the mountains, the feeling was that we were in a world of noble warriors, courageous and free. At every bend, that sacred Tibet of the imagination slowly disappeared along with the static facade only seen in postcards and documentaries. Instead, this is a place where Buddhist philosophy meets crazy bikers, where thousand-year-old traditions and modernity live under the same tent, where the natural colors of animal fiber complement fluorescent blue polyester tracksuits.
The Tibetan Plateau redesigns itself by the evolution of its people. And mYak wants to evoke the spirit of this changing land, where small communities of nomadic herders join in a cooperative and follow the advice of an Italian vet.

All this while holding onto the traditions, the philosophy and the strength that make Tibetans a ubiquitous and autonomous tribe, who, in their interaction with other civilizations that might intrude, remain true to their autonomy of thought, of ways, of lifestyles. A kind of modern punk take on the world and life.

We arrive at a small village set up out of necessity for communication and exchange. The architecture is non-existent; it’s temporary, devised to resolve temporary problems, never to last in time, on the contrary, ephemeral, so that it can be demolished and rebuilt quickly in other places. The value of the ephemeral as a way to survive. An awareness engrained in of all nomadic people’s lives.

People of today and of a thousand years ago

Politeness and strength, kindness and determination, memory and modernity. These opposites live side by side on the Plateau. Like the dark yak wool coats, woven on looms, their family assets, worn over silk or polyester shirts decorated with flowers and imported from China, or with small shocking pink scarves, and adornments of earrings in gold and fossilized coral from the mountains. The men move across the vast mountains on the latest model of motorcycle, which are decorated with saddles and blankets like cowboy horses. The grandeur of the place and the personality of the context is such that even the most modern objects—like a motorbike that replaces a horse, the iPhone to communicate over the long distances, the fluorescent Nikes instead of uncomfortable hiking boots, become immediately absorbed into an ancient and firmly-rooted iconography of place. Even the most technologically-advanced or futuristic object, once it enters the Tibetan context, acquires by magic its own historical significance and looks as if it had always belonged there.

Each gesture a mantra

At night the village empties. The men join the women in the tents on the grasslands with yaks and sheep, the monks reach their monasteries in the mountains, the farmers go back to their farms. Even the work commute becomes a nomadic ritual, cyclic, repeated like a mantra.

Let’s go back to the origin of the fiber

Since the beginning we felt that Italy, with its ancient manufacturing traditions of the highest artisanal standards, would be the perfect place to honor the pure beauty of the Tibetan Plateau’s baby yak and cashmere fibers. Tibetans, as herders and farmers, also have ancient customs of spinning, weaving and dyeing. We seek to support this traditional culture, together with the local population, with the objective of reviving those activities back into the production chain of these areas. We are pleased to soon be introducing this new small production “Made by Hand on the Tibetan Plateau.”

So, after each trip, we take back home the pleasure to be part of this world—its mountains, its nature, and its people. And also the satisfaction of bringing to the most refined and demanding enthusiasts for these exquisite fibers, these natural wonders that come from one of the most extreme places on the planet.

The yak, the owner of these lands

The household yak (Bos Grunniens) is the animal around which revolves the whole life and economy of the Tibetan nomad. From its milk, one gets yogurt, butter and churra, the typical dried cheese of the grasslands. It’s a transport animal indispensable in the long seasonal moves. Sturdy yak hair is used to weave the traditional black nomad tents. Its dung, once dried, represents the only fuel available on the Plateau, vital to survive the very harsh winters. And eating its meat is an indispensable method of getting the calories required to survive in such an extreme environment,

Among the rocks, we meet the Tibetan cashmere goat

We are climbing towards more remote areas, where the plateau grasslands give way to very steep slopes that descend all the way to the Yellow River. This is no land for yaks, who are too heavy to be nimble and require vast pastures. In these extreme lands, for thousands of years, the nomads have been raising the rare Tibetan cashmere goat. It is a very special breed, raised only in small herds, and extremely agile that it can casually jump along the precipices of the highest mountains in the world.

This is our Tibet—the land, the people, the animals, and the story from which mYak is born.